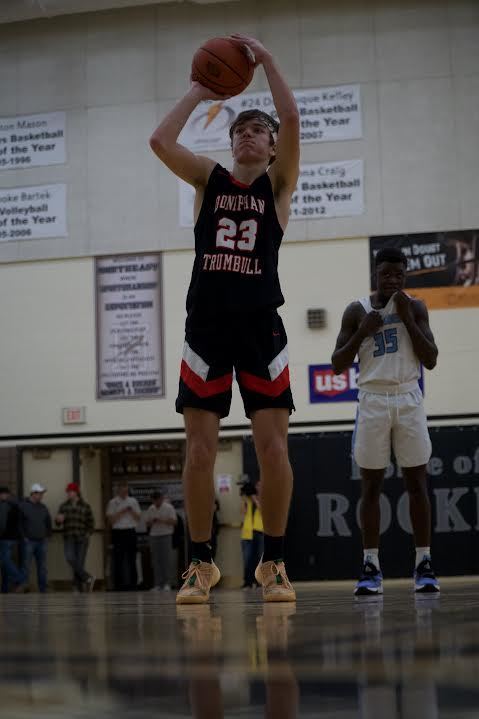 Basketball Reflects on a Successful Season

DT is going to Lincoln

The Doniphan-Trumbull boy’s basketball team made history this year by qualifying to state for only the third time in DT school history. This success did not just come overnight, it has come through hard work, starting when this group were  young kids.

Last season the team came up short, losing to Centennial in the semifinal game of districts. This loss motivated the team to get in the gym in the offseason and put in the work to make it to Lincoln.

Senior Myles Sadd said, “We all got together a lot this summer and put in the work, and it is showing and paying off this season.”

DT started off the season very strong beating their rivals, Hastings St. Cecilia, and going on the win their first 9 games of the season. DT remained undefeated until falling to the highly rated GICC Crusaders.

Senior Blake Detamore said, “We didn’t let that GICC loss distract us from what we want to accomplish in the rest of the season.”

The Cardinals went on another winning streak, winning 7 straight after their loss to the Crusaders. They were feeling confident going into the Lou Platte Conference Tournament being the 1 seed, but they fell short in the championship game to Central City, who they had beat earlier in the season, by 3 points. Their record was sitting at 16-2 and top 5 in the C2 rankings going into the final stretch of their season.

Senior Ethan Smith said, “I was feeling confident and excited going into the final stretch of my senior season.”

They went undefeated the rest of the regular season and going into district play they were sitting at the one seed with a record of 20 wins and 2 losses. They played Amherst who is a top 10 team in C2 in the semi-final of districts. They fell short to Amhest by 10 points, but luckily they had enough power points to get a wild card to a district final game.

Senior Andrew Stock said, “I was excited to play in the districts final game because it was a chance to secure our spot in Lincoln.”

The Cardinals were the 5 seed playing against the 12th seed Bridgeport bulldogs. The teams played at a neutral site, North Platte St. Patricks High School. DT came out to a slow start with the score being tied at half. The Cardinals didn’t let their slow start faze them, as they extended their lead to eight at the end of the 3rd quarter and ended the game winning by 19 with the score being 60-41.

Sophmore Jaden Williams said, “I was excited going into state because this is my first playoff or state game of my career.”

In the first round of state, the Cardinals faced GICC who they lost to previously in the season by 12 points. DT looked to get revenge on the Crusaders, but unfortunately came up short in their game by a score of 51-47. That loss ended DT’s season and they finished with a record of 21-4, which is the best in school history.

Senior Chris Uhrich said, “I am proud of how our team played this year, even though it didn’t end the way we wanted it to.” 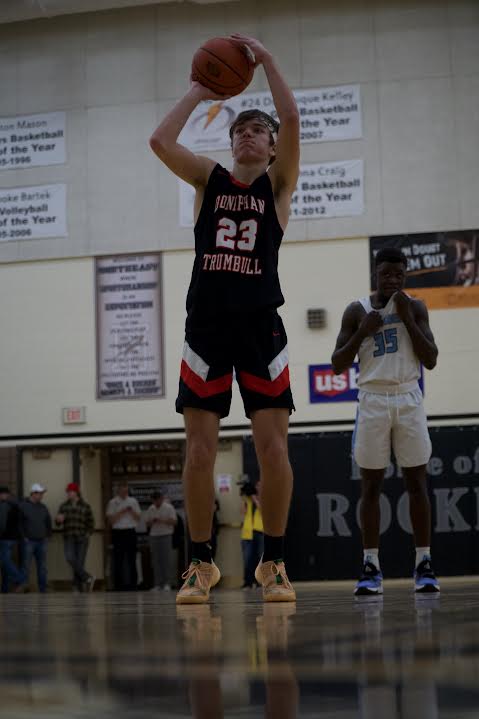 Andrew Stock shoots free throws to tie the game up in Monday's game against GICC.