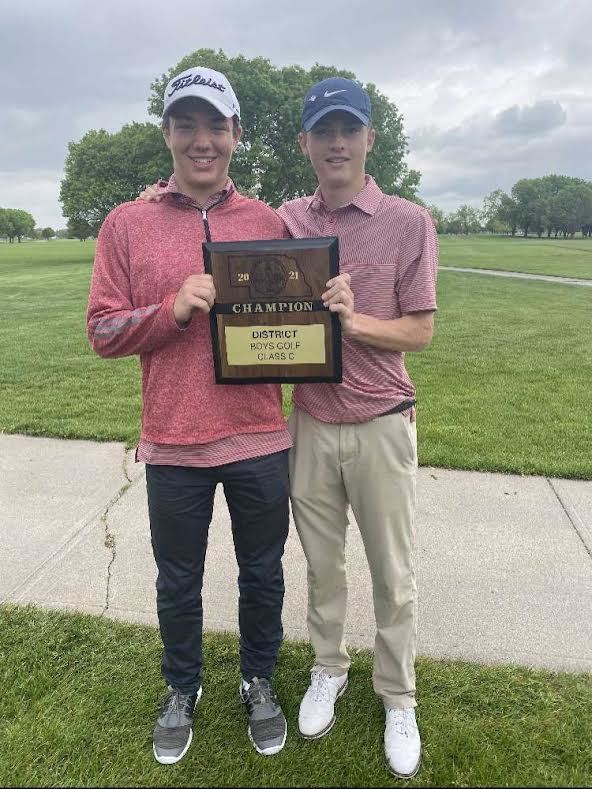 Looking Ahead to the Senior's Final Golf Season

The future of DT golf is bright

As winter sports come to an end and spring sports are starting up, seniors Andrew Stock and Ethan Smith are gearing up to hit the links. These two seniors are looking to lead their team to state this year, shooting for a perfect ending to their high school golf careers as they prepare to take their game to the collegiate level next year.

They didn’t just become state contenders overnight though, they spent hours and hours of their free time becoming better so they could achieve their goals. Smith and Stock have been friends and competitors of each other since they were young, traveling around the area and playing in tournaments and helping each other be their best.

Smith said, “I remember when we were younger and we used to wake up early in the morning and head to the golf-course and we would stay there all day until our parents got done with work and picked us up.”

This friendship started early on, as their dads both enjoyed golfing together, often bringing their young sons to the course with them. As children, they were constantly at the golf course, practicing their putting and hitting drivers at the range, waiting for their dads to get done playing holes.

“We are both very competitive and we strive to be the best, getting to play together and improve together over the years has been great,” Stock said.

Stock recorded the second-best scores on the team last year, penciling in his best score at the Red Cloud invite where he shot a personal best with a score of 77. Stock hopes to make great strides from last year's tough ending to the season. Stock hit a season low at the state competition hitting a score of 95 on the first day but got more comfortable going into the second day improving by 7 strokes and hitting a 88.

Stock said, “My goal this year is to record a new personal best of 72 or lower and hope to individually place at the state competition and for our team to place at state.”

Smith achieved many individual goals last season including placing 3rd at the state competition and breaking the school record for lowest score in school history, breaking his own record 3 times with a score of 68 at Doniphan-Trumbull’s home invite at Indianhead golf course in Grand Island. He ended the season with a 3rd place finish at the state competition while coming out strong the first day hitting a 76, but ending the second day 6 strokes worse at an 82.

Smith said, “My team goals for this year are to win conference and place at state, and my individual goals are to shoot under a 65, win state and conference.”

While this season’s results aren’t in yet, both Stock and Smith won’t be leaving the greens anytime soon. After high school Stock will continue his academic and athletic career at Northwestern College located in Orange City, Iowa. He will be playing golf there for the next 4 years while studying to become a financial advisor.

Stock said, “I am excited for my next 4 years playing golf and getting my degree at Northwestern College.”

Smith will be continuing his athletic and academic career at Iowa Western University located in Council Bluffs, Iowa. He will be playing golf there for 2 years, before transferring to a 4-year university for golf and to pursue a business major.

Smith said, “I am excited to go to Iowa Western to play golf for the next year, make some great strides, and hopefully transfer to a 4-year university to continue my golfing career.”