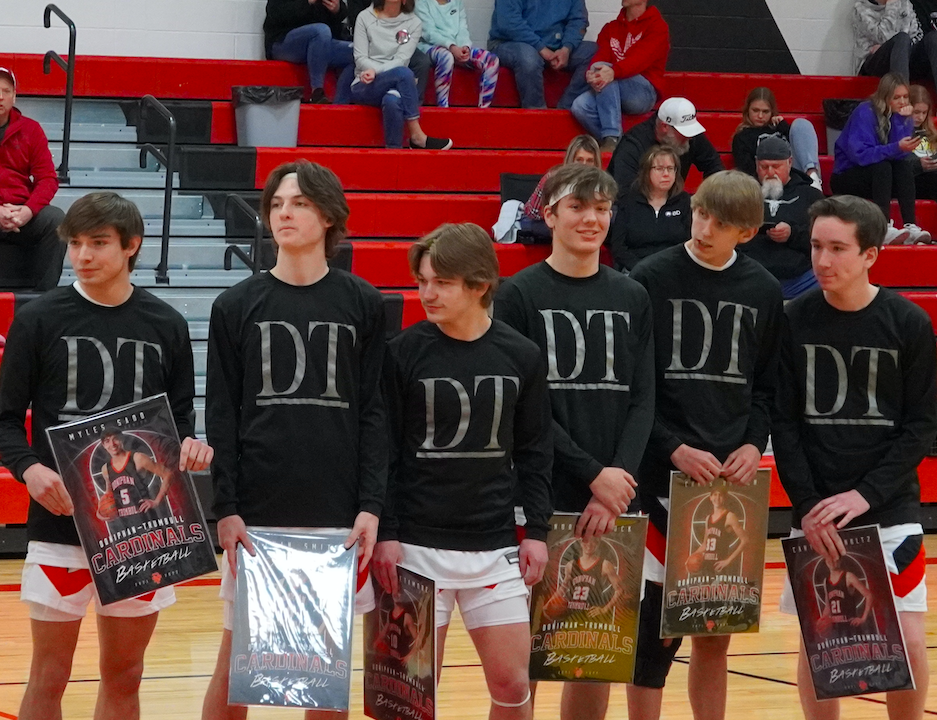 DT Journalism Presents: A Celebration of the six seniors on the boys baseball team and their unfailing bond.

Teammates by chance brothers by choice

Friendships that will last forever

The 2021-22 Doniphan Trumbull boys basketball team is having a remarkable year. The boys have a record of 16 wins and only 2 losses so far this season and are currently sitting 4th in Class C-2. In the state of Nebraska, the team is ranked 19th, and in the LouPlatte Conference, they are ranked number 1. The success of this year’s team is due, in large part, to the exceptional group of seniors who have been running up and down the court together since before they could even tie their shoes.

“I am very excited to play my senior year with my best friends; we’ve been together forever, and it’s a blast,” said Ethan Smith said, “The team has improved a ton since we started, and we hope that we can make it to state.”

This year’s 6 seniors, Myles Sadd, Blake Detamore, Chris Uhrich, Andrew Stock, Carter Schultz, and Smith, have been playing together since elementary. They have built a strong bond and have big goals for their final season playing together.

Stock said, “When we were little we would all talk about how exciting it would be if we made it to state our senior year, so we are really trying to make it as far as we can go for our final year.”

This group of six has been running up and down the court since they were in third grade. They have worked very hard through the years of playing together to get to the point they are at today, and through their work, they’ve formed lasting friendships.

Sadd said, “I feel very grateful that I have been playing with my friends all these years, and I feel like we have a very strong bond.”

As their time playing together comes to a close, this group has been looking back to when they first picked up a ball. As they prepare to take the court for the last few times, they remember when they were little and would travel to basketball tournaments, even managing to get 1st place at a few. Even back then, playing together was less about winning and more about the feeling of being a team, being together and making lasting memories.

“I remember one time when we were younger and we were tied with a few more seconds to go and Myles chucks it from half-court and swishes it,” Detamore said. “I am really enjoying the season so far and am excited to see how far we can go.

That bond has only strengthened through the years. Even now, the bus rides to the games and spending that time together off the court are some of the best parts of game days.

“One time when we were on the bus, we all just started singing this song out loud. It was so funny,” Schultz said. “It feels really good getting to play with all of my best friends for my last year of basketball.

With all of these amazing seniors contributing to the basketball team, the Cardinals hope that they can make it to state and make their last year one to remember. The boys have worked so hard this season to get to where they are this year, and they hope to take their efforts all the way to Lincoln.

Uhrich said, “The season has been going really well. I hope that we can make it to state, especially since this is our last year playing together.”